The Workers’ Camp Bunkhouse will be built on the east side of the Arroyo to interpret citrus labor in all its complexity. The camp includes a bunkhouse for male bachelor laborers and small cottages for married workers. Among the important pieces of history to be shared will be the voices of various Native and migrant workers, highlighting their contributions and how they shaped the cultural landscape.

Native Americans were the first workers involved in the groves and the construction of early waterworks. Followed by a great influx of Chinese immigrants, which exceeded 100,000 in 1885, supplying more than 80% of the agricultural labor in California and who introduced furrow irrigation and picking clippers. Chinese immigrants were an integral part of the social structure in citrus culture; they “worked in the homes of wealthy growers, managed ranch crews, grew most of the fresh vegetables for sale, operated laundries, merchant shops, and China trade shops, and provided the first ‘California lottery.’”1 Anti-Chinese prejudice and the passage of the Chinese Exclusion Act of 1882, limiting immigration of workers, ultimately drove Chinese laborers out of citrus agriculture. The Japanese were credited in 1909 with the industry’s incredible expansion, as they provided cheap labor and horticultural expertise that was critical at the time. However, anti-Japanese sentiment drove the Japanese out of citrus labor much as had happened to the Chinese before them.

Mexican workers have supplied the principal workforce in citrus since the Mexican Revolution. By 1919, Mexicans and Mexican Americans comprised 30% of the workforce, which grew to two-thirds by the 1940s.

In addition to recognizing the changing demographics that citrus brought to California, there is also an opportunity to share how the harvesting operation has and continues to evolve and the resulting changes to the workforce.

Located across the arroyo near the workers’ bunkhouse, the Packing House will interpret orange packing operations, and the rise of cooperative packing and marketing by the California Fruit Growers Exchange (CFGE), now known as Sunkist Growers, Inc. that handled nearly all of California citrus sales.

By 1915, CFGE (Sunkist) equaled the massive meat packer trusts Swift and Armour in scale and scope. By 1944, there were 329,700 acres under citrus cultivation, resulting in 65.5 million 80lb boxes of citrus being shipped from California to Eastern markets. Upwards of 70% of the growers at one time or another belonged to the CFGE (Sunkist) in the heyday of the navel orange industry in California (1915-1980), bringing back more than $200 million per year to California growers.

The reason that citrus is referred to as the second gold rush in California is because in the first 25 years of the 20th century, citrus earned California more than a billion dollars, fully $250 million more than all the gold dug up in the state during the entire last fifty years of the nineteenth century!

It also led to industrial and technological advances such as box making machines, citrus packing equipment, and the shift from custom-smithed machines to machine shop-made equipment.

The Packing House will be a place to highlight these and many other significant developments that transformed California in the early years and the continuing evolution of the packing operation in response to changing regulations, science, technology and to prevent the spread of Asian citrus psyllid. Also across the arroyo is the Western Engine, a 17-ton, 200 horsepower engine, built in 1926. It was instrumental in pumping water to elevated reservoirs that would irrigate the citrus groves. The Western Engine was donated to the Park from a local historic water company and was recently completely restored to operational condition by a group of dedicated volunteers. It is a true artifact from the old Naval Orange Empire. To see the engine running, check out this video on YouTube: WAPA Running the Western 200hp Engine at Citrus State Park.

The Western Engine sets the stage for sharing the history of the development of irrigated agriculture as well as the conflicts surrounding water and water rights, which led to the formation of the Riverside Water Company in 1884 and helped shape California’s method of water management. It will also highlight the history of the development of the Gage Canal, which continues to serve the Park and surrounding groves.

There is also an opportunity to link the past with the present in highlighting the continuing issues surrounding water and the efforts to balance the needs of agriculture, people and the environment. In the center of the Park, overlooking the arroyo and adjacent facilities will be a multi-use activity center constructed to resemble a historic home with an appropriate architectural style of the era. This facility will be a hub for the Park, allowing larger groups to convene for school programs, conferences, and events, which will generate ongoing revenue for the Park.

The interpretive displays in the facility will connect the past to the present, highlighting how citrus initially took hold in this region, how the economy was fueled by citrus production and its continued importance within California, the nation and around the world. It will also illustrate the multicultural impacts that will be meaningful for all visitors.

Other features adjacent to the facility include a carriage house and worker’s barn, which will illustrate the equipment used for cultivating citrus and provide insight into the labor involved.

Pedestrian Bridge Across the Arroyo 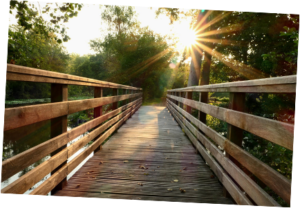 To connect all the features within the park and re-create another important historical feature, a walking bridge and pathway will be built across the arroyo to allow visitors to easily travel from the Multi-Use Activity Center to the Western Engine, Packing House and Workers’ Camp Bunkhouse.

Friends of California Citrus Park. Copyright © 2022
Build with by Raincross